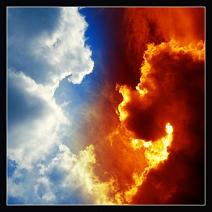 Here is a collection of near death experiences stories. If you have just stumbled straight to this page, please be sure to read my own NDLE (near death LIKE experience) of Hell plus a life-review by clicking on HOME above or here:

Proof of God: My NDE of Hell & Testimony

Following my own experience in 2008, I obviously became very interested in other people's similar experiences. This led me to research them where I also discovered the term NDLE (near death LIKE experience) – the meaning is in the name. They are similar experiences but without being close to death.

Here's just a few stories that I found very interesting and convincing, including some NDE YouTube videos.

Dr. Raymond Moody is a psychologist and medical doctor, and has studied NDE experiences for decades, written books on them, etc. His website says this about him – “Award-Winning Author Dr. Moody received the World Humanitarian Award in Denmark in 1988. He was also honored with a bronze medal in the Human Relations category at the New York Film Festival for the movie version of Life After Life.”

Regarding his own beliefs on NDEs, here's two quotes, which I have copied from Wikipedia:

"In this book [The Last Laugh], he says he does not consider them to be conclusive proof of life after death, and is disturbed by the use of his works by religious fundamentalists and New Age gurus to further their causes."

But then, in an interview with Jeffrey Mishlove (http://www.intuition.org/txt/moody.htm):

“I don't mind saying that after talking with over a thousand people who have had these experiences, and having experienced many times some of the really baffling and unusual features of these experiences, it has given me great confidence that there is a life after death. As a matter of fact, I must confess to you in all honesty, I have absolutely no doubt, on the basis of what my patients have told me, that they did get a glimpse of the beyond.”

Now consider the following example out of many veridical NDEs, documented by Dr. Moody (taken from http://www.near-death.com):

Example:   An elderly woman had been blind since childhood. But, during her NDE, the woman had regained her sight and she was able to accurately describe the instruments and techniques used during the resuscitation of her body. After the woman was revived, she reported the details to her doctor. She was able to tell her doctor who came in and out, what they said, what they wore, what they did, all of which was true. Her doctor then referred the woman to Moody who he knew was doing research at the time on NDEs.

I find it particularly difficult to believe that a woman, blind since childhood, could precisely describe who came into the operating room and what they were wearing, was “only” experiencing the effects of a brain deprived of oxygen.

Here is a 10 minute YouTube video of Moody and co-author Paul Perry, where Moody describes these shared experiences:

Moody: “Now the implications of this is [...] this really does throw a monkey wrench into the traditional way of debating NDE experiences. Because what the physiologists tell us - that these experiences are hallucinatory; that as the person is dying the oxygen supply to the brain is lowered, and hence they have these hallucinatory effects [- is now doubtful, because:] if that's true, why would the bystanders have the same kind of experiences? That's very difficult to explain. And I think that once these findings come out, and are thoroughly understood by the public, we're going to be into an entirely new dimension of discussing NDEs, because that old stand-by of “oh, this is just hallucinations cause by brain damage” – that's out the window now with these empathic experiences.”

Relevant excerpts taken from Wikipedia: “Howard Storm is a former atheist and art professor and chairman of the art department at Northern Kentucky University, best known as the author of the book My Descent Into Death about his near-death experience. Storm's NDE is the best known of contemporary distressing NDE accounts. Storm's account has been termed probably the most complete description among NDE accounts of evil spirits in another world.”

There are many videos on YouTube about Storm and his NDE; interviews, dramatizations, etc. Here is a relatively short one (~23 minutes) where he talks through it with some dramatization cut scenes.

This is exactly what I was saying and how I felt after my own NDE experience. And just like Howard Storm did, I turned my life around on a dime, because in no way did I ever want to end up in the place I was shown.

Tamara attempted suicide by shooting herself in the chest. She died and came back to life. She believes she experienced the afterlife between the time she was bleeding out and when she recovered. Similar to some other's NDE experiences, her testimony gives proof of Hell.

She tells her story in this 17 minute YouTube video:

Relevant excerpts taken from Wikipedia: “After backpacking and surfing through Asia and Africa, Ian ended up on the Island of Mauritius off the coast of Africa in the Indian Ocean. While diving, Ian was stung by five Box Jellyfish, specifically the deadly variety of Box Jellyfish called the Sea Wasp - Chironex fleckeri. Paralyzed and dying, Ian was rushed to a hospital. While there, Ian states he experienced visions of heaven and hell, and felt Jesus empowering him to live so he might tell his story to others. According to Ian's testimony, he came back to life on a slab in the morgue a full 15-20 minutes after he had been declared dead by the doctors. He was paralyzed from the neck down, but he prayed to be healed and walked out of the hospital the next day. After his experience, Ian describes how he thought he was the only one in the world who knew God. He began reading a Bible and says he was amazed to find everything he had experienced detailed within its pages.”

Here is a re-enactment YouTube video of his NDE. A great video to watch, especially with Ian speaking at the end, talking the viewer through the salvation prayer etc:

The above near death experiences stories are just a sample. As I mentioned in the intro, I have my own NDE story which changed my life forever. Read it by clicking on Home at the top of the page or click here.